One of the exciting, and exhausting, things when living with small children, is that daily life consists of a constant series of firsts and lasts. A permanent series of hellos and goodbyes and not all of them are equally welcome to be sure.

The good, the bad and the ugly

Some of the firsts are unexpected (like Mimi #1 deciding this August that she was potty trained) and some of them are eagerly awaited (like my longing for Mimi #2 eating proper solids, so the days of cooking different things would finally be over). And most of them make you cry and laugh at the same time.

I want to remember happened this summer

As the days, weeks and months have a tendency to just fly by and then, in hindsight, are one garbled mush in which I cannot find anything anymore (actually much like our appartment at the moment), I have decided to use this blog to record some of them which all happened this summer.

1.) First time the Mimis saw the sea (well, don’t think Mimi #2 cared too much). An event, I believe, which was most exciting for the parents. I made about a million pictures of the event, just to make sure it wasn’t forgotten.

2.) Mimi #1 discovered the joys of the “Babyccino” (which she insists on calling “‘Appuccino” and looked incredibly grown up and well behaved while drinking it. Which, I can assure you, she is not most of the time. Also, I love the way you can see how she peeled her bun in the pic below.

3.) we went to the annual fair in our hometown and ended up buying two humonguous balloons, which I’ve enjoyed more than I thought possible (and by the way, why can’t Mimi #2s legs not always stay as cuddly as they are in this picture?):

4.) The obvious milestone of Mimi#2 mastering the art of walking around the 4th of September 2016, which later on was followed by the mind-blowing notion, that it meant I could actually walk to my car without carrying one (or two) children. And this was the day she just -almost- managed it: 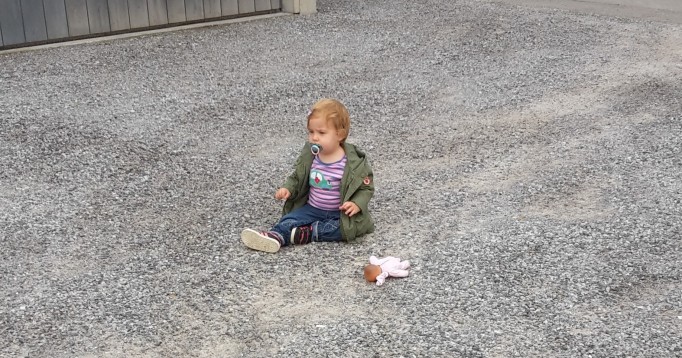 5.) we walked in the mountains. For almost 400metres I believe. But still, we were there and had a picnic:

6.) and in the past two weeks the firsts kept piling up: there was the day that the girls actually played by themselves for almost 10′ (you get modest with your demands, don’t you).

5.) we said good-bye to our formula box which had accompanied us now for a good 2.5 years and was used every single day. This might not seem like much, but is was one sure sign that we are moving ahead and that we will soon be outgrowing the life-with-a-baby-thing.

RIP formula box of our household. Thanks for being there every day, also on ungodly hours… (btw. no idea why TMD aka my husband chose something with coffeebeans on it, wishful thinking?)

6.) Mimi #1 eats whole apples. Well, actually halves of whole apples but still. She stopped eating apples for a while (might have had an overdose from her puree-phase) and has refused to eat sliced apples. Huge improvement in any case!

7.) No Pictures available for this one: first trip to the dentist with two kids after Mimi #1 had taken a fall off her Triptrap, on to the stone-floor with her teeth first. An incident which I will definitely remember, but not for the right reasons. All good again though, even if she now sports one grey tooth.

8.) No Pictures of that one either, (but I’m sure you’ll be glad about this): first time we were woken up in the night to find out that Mimi #2 was covered in sick. I assure you it is just as disgusting as it sounds and I would love to know that this was also the last time this happened. But I am being told that this is not the case. Damn. (huge shoutout to the inventor of the washing machine. I mean, we washed the sheets, not the kid of course)

9.) Mimi #2 mastered the art of climbing her older sisters Triptrap chair. A development which I still cannot welcome whole-heartedly to be honest. Especially after #7

10.) Mimi #1 decided she also did not need any nappies anymore during the night. Me, like, NO you are wearing them (since I am really not keen on being woken up every night by a bed-wetting incident). So we made the deal that if her nappy was dry in the mornings for 10 times in a row (not as if she could grasp the concept of 10 nights yet, but it sort of helped giving her a target), we would ditch the nappy. And so she did. Am still in shock.

I’m sure there are even more stunning, joyful, exciting, gross and exhausting firsts ahead of us for the winter (can’t wait for the snow/ski bit).

Any firsts on your side recently? Let me know in the comments, especially the weird and wacky ones!

Welcome to the blog of a human, mother, worker, wife and friend who refuses trying to have it all (and never stops marvelling at all the great things that happen on the way there). If you'd like to start from the beginning, click the blog tab at the top of this page.